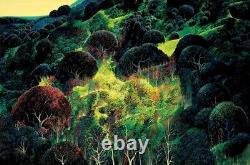 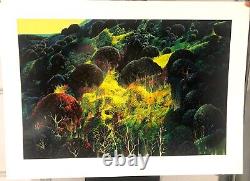 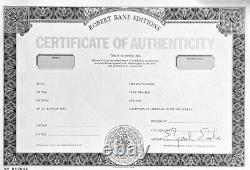 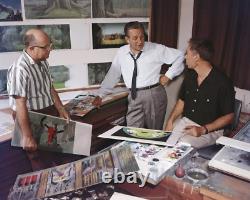 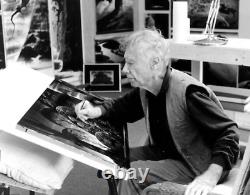 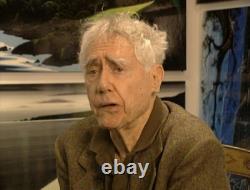 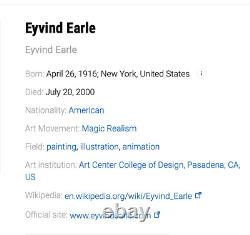 This serigraph is a 105 color hand pulled fine art Serigraph, printed in Los Angeles California 1990. Eyvind Earle was Born April 26, 2016, in New York City and passed away July 20, 2020. His art has been described as Designed Realism. Eyvind Earle is best known for his design and stylization of the world-famous Disney movie Sleeping Beauty, which was a 1959 American animated classic musical fantasy film. Although the film was enchanting it was nearly impossible to Animate.

But with the collaboration of the Walt Disney and Eyvind Earle they released " Sleeping Beauty" an all-time classic animated film. Eyvind Earle's first project with Walt Disney was Peter Pan. He later was promoted to top background painter and worked on other great animated films such as "For Whom the Bulls Toil in 1953", and "Lady and the Tramp in 1955" But it was with Sleeping Beauty created in 1959 that Earle truly left his mark. Has been safely preserved in a special temperature-controlled storage facility for 36 years and is in perfect never touched condition. This print was a original proof which is accompanied by a hand-signed certificate of authenticity signed by the artist Eyvind Earle. This serigraph is in beautiful condition never handled or owned by anyone other than the Publisher. The artwork measures as follows: Paper size 30.5" x 42" and the Image measures 24" x 36". Each Serigraph was meticulously produced by a highly trained serigraphy printer to ensure color density and texture. In the original beautifully executed serene oil painting, the artist was able capture for the viewer a calm and tranquil setting with his highly stylized mountains and composition. The colors utilized in this extraordinary image Autumn Fields was meticulously painted by Eyvind Earle in a spectacular technique known as layering using only oil based paint. This technique creates contrast, shadows, depth of field, and very vibrant colors. Serigraph ws printed in 105. Colors had to be carefully silkscreened in perfect registration one color at a time. Any type of error and the. Edition would have to be reprinted. Autumn Fields is a rare and highly sought-after Serigraph (collectors Item) illustrating the artist's extraordinary portrayal and interpretation of our countries magnificent landscapes as seen and visualized only through the eyes of Eyvind Earle with his highly stylized technique and unsurpassed. Paintings, watercolors, engravings, sculptures, animated cells and his. Prominently displayed in galleries and museums around the world. Establishing himself amongst America's most celebrated artists of the 20th.